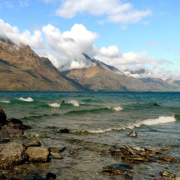 Maori tradition talks of the Rakaihautu commander of the Uruao canoe digging the Southern Lakes with his magical spade (ko). The mountains were abundant in resources not found on the coast including several species of Moa, bird life, vegetation and stone.

There is no definitive date as to when the land was first set foot on by man. It is known through Waitaha song and chants that it was the Rapuwai, followed by the Waitaha, that first came to the valleys. As the Moa became extinct in the 16th century the Kati Mamoe tribe migrated into the southern mountains and by the 18th century had a permanent settlement in the Wakatipu area. During this time Kai (ngai) Tahu also migrated south and successfully challenged the resident tribes for the mountainous lands and lakes.

Many archaeological sites are known in the Dart and Rees valley. Artifacts and middens show a wide roaming Maori population; some sites are located on routes for trans-alpine party or seasonal coastal visitors.

Nephrite Jade (Pounamu) was collected from the Dart and Routeburn. The Dart jade source, revealed in oratory from tribal elders, is now protected in the National Park. The beautiful green stone reflected mana, prestige and power on its owner. It was used for tools, decoration and as gifts.

Further challenges from northern tribes disbanded the populations of the area and as the European explorer Nathaniel Charmers found his way inland in the 1850s there were few seasonal tribes in the area. Charmers was guided by Reko, a Maori, who knew the old trails. Reko was given a three legged pot for his trouble, before Charmers returned sick and exhausted to the coast.

1857 saw John Turnbull Thomson, Otago chief surveyor, capturing images of the land in his watercolours, as he surveyed to promote the division of the land for pastoralism and settlement. David McKellar, a sheep farmer, explored the head of the Wakatipu basin in 1858 and two years later William Gilbert Rees stocked the river flats of the Dart and the Rees valley with sheep. The first settlement was a shepherd hut occupied by Alfred Duncan and George Simpson who worked for Grant Gammie and Rees, the initial owners of the North Run Holding.

The pursuit of grazing lands continued and was closely followed by those in search of gold, timber and road ways. The gold rushes of Central Otago in 1862 bought a wave of prospectors to the district. Alluvial mines emerged at the Oxburn, Precipice and Rees Valley. The Dart dredge operated for a short time at Dredge Flat. In 1863 names such as J. McKerrow, A.J. Barrington and P. Q. Caples left legacies of daring exploration over rugged passes and terrain.

Glenorchy town was surveyed in 1864 by G.M. Barr but up until 1885 the only buildings in it were J.K. Birley’s hotel and store and the head quarters of North Station which had passed into possession of John and Thomas Butement. At Mill Creek there was a large timber mill operated by J.W. Roberston & Co.

The 1870s saw the first steps toward a visitor industry with the establishment of a hotel at Kinloch run by R.C. Bryant offering guests experiences around the Routeburn. This resulted in the surveying of Kinloch town in 1880 by A.D. Wilson.

Iconic figures such as the prospecting wandering handy man Bill O’Leary, the British son of gentry, Joseph Fenn, and the home grown hotelier, mountain climber and guide, Harry Birley, characterized the tough independent nature identified with the head of the lake, along with the welcoming warmth and hospitality characterized by the Aitken family at beautiful, remote Paradise.

By the turn of the century there were four hotels and two major guest houses at the head of the lake. Walking, riding, camping and guided climbing were the main attractions. The township and area consolidated with the building of post offices, small schools, a lending library and mission hall. Land tenure changed with the onset of rabbit plagues, the depression years and subdivision. Several large holdings remained: Wyuna, Crichton, Temple Peak, Mt Earnslaw and Routeburn. Later several smaller farms also came into existence like Lake View, Camp Hill, Mid Rivers, Woodbine and Priory.

In 1902, Scheelite, which had been identified during the gold rush in the Precipice and the Bucklerburn, was to help create the next economic boom for the small community. The Scheelite contained Tungsten useful in industries to fix dyes, produce electrical filaments and in the steel industry. It was considered a metal of strategic importance in wartime as Tungsten steel was used in the barrels of large calibre guns. Scheelite lodes were found on Mt Judah and in other sporadically scattered locations. On outbreak of war in 1914 prices of Scheelite increased 80% only to fall again by 1920 and remain static until the Second World War in 1939 when it gained record returns. In 1942 the government bought the Judah mine, but the broken nature of the lodes made large scale mining uneconomic and the end of the war saw an end to state involvement. Miners returned in the 50’s for a further boom on outbreak of war in Korea, but it was short lived. Today the area is an historic conservation estate.

Apart from a bridle track built around 1870, Glenorchy was dependent for nearly a century on the Wakatipu steamer service for its connection with the outside world. Glenorchy was serviced by a flotilla of early steamships and launches, the Ben Lomand, the Jane Williams and the Meteor. By 1912 the SS Earnslaw started, a twin screw steamer with a cruising speed of 13 knots and a capacity for 1035 passengers, 1500 sheep, seventy head of cattle, or 200 bales of wool. She also occasionally carried cars or buses to Glenorchy. The Lady of the Lake took two hours to steam her way to Glenorchy three times a week, dominating the township activities on boat days with unloading passengers, goods and fresh food. She also connected with Kinloch, unloading tourists for the Bryant family to transport to the Routeburn via horse drawn wagon, then Oakland cars and finally a small fleet of Ford buses.

At Glenorchy the road to Paradise was also busy with tourists transported on horse drawn drags. In 1912 the use of motor vehicles coincided with the opening of bridges over the Rees, 12 mile and Earnslaw Burn. Completion of the Glenorchy to Queenstown road in 1962 spelt the beginning of the end of tourist carriage, to which finality was added with the withdrawal of the SS Earnslaw. In 1974 the last major river was bridged. The Dart Bridge gave all weather access to the settlers at Kinloch and Routeburn as well as a direct link to trampers and visitors to the Routeburn Valley.

Mt Aspiring National Park was gazetted in 1964 and continuous improvements were made on the tracks, huts and bridges. Park boundaries increased over time with additions through revisions and the Tenure Review. Today the park manages tracks, heritage, recreation permits, and conservation including endangered species particularly Mohua (yellow head), Whio, native bats, Kea and Kaka.

Glenorchy acquired its first public hall in 1943, a true multi-purpose facility. In 1947 Mr L. Smith installed a generator at the Buckler Burn followed by Hydro-electric plants placed at Temple Peak, Rees Valley and Earnslaw. In 1967 Otago Central Electric Power Board built a dependable power station at the Oxburn, before finally connecting to the main grid.

Glenorchy School found its permanent position in 1939 and has been a central hub of the community. Many of today’s pupils bear the same names as the original pioneers of the area or of the remarkable landscapes that they live in. The school presently teaches years 1-8 in comfortable classrooms with support areas and a technology room. The school is well known for its high powered Wearable Arts productions, camps, and ability to empower the pupils to rise up to the challenges as they go on to further their education.

Traditionally the Glenorchy community has embraced fund raising to help with various projects. Glenorchy Race day contributed to funds for public buildings, the fire-brigade, the hall, library and museum, preschool building, swimming pool, rugby club rooms and First Response Vehicles. Today the day continues as a draw card for locals and tourists alike celebrating the character and beauty at the head of the lake.

More and more the area has become well known through exposure in advertisements and small and large scale movies. The images portrayed are dramatic, distinctive and enduring. Lord of the Rings, Narnia and Wolverine are international success stories which have strong links to the Glenorchy and Paradise areas.

Though farming has remained a strong grounding force, changes in farming practices, diversification into deer, cattle and sheep breeds, have eventuated in pace with market demands. Subdivision has eaten into rural lands and the lifestyle block on exclusive holdings and large lodges have become more common. Tenure review and the Treaty of Waitangi have seen a lot more high mountainous land pass into National Park or Recreation reserve. The mountainous tops of Greenstone, Elfin Bay and Routeburn were given by Ngai Tahu back to the people of New Zealand, named Ka Whenua Roimata, The Land of Tears, to commemorate the long fight to reclaim their rightful territory. The historic Scheelite area on Wyuna is known as “Whakaari” or high place, and is a recreation and heritage area. Tourism has flourished and is rapidly creating its own niche brand. Eco tourism, conservation, recreation opportunities, accommodation, cafes and restaurants, horse trekking, retail outlets, camping, biking, kite surfing, kayaking and ski activities are a few related businesses to stem from increasing tourist numbers.

Glenorchy at the head of the lake is ‘its people’. One third-generation local recites eleven different vocations undertaken during his life here. Others are happily ensconced on their fore-bearers land with no intention of changing and yet others are settlers from far places, hoping to make a life here. There are transient workers, enjoying the cliquey small community and holiday visitors, secluded from their urban chaos. Whoever or whatever that it is that is presently making history, will chop and change, but the one thing that remains constant, is the beauty and inspiration of the mountains and the wilderness of the river valleys that the area is famous for. 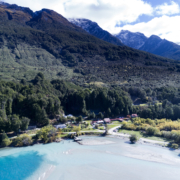 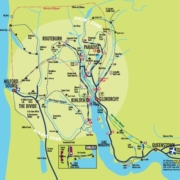 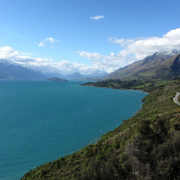 Akos Kokai [CC BY 2.0 (https://creativecommons.org/licenses/by/2.0)], via Wikimedia Commons How to get here 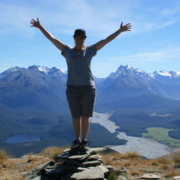 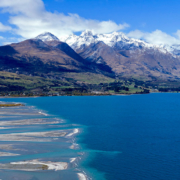